Read this May 2018 commentary on the 340B program from Bruce Siegel, MD, MPH, president and CEO of America’s Essential Hospitals. 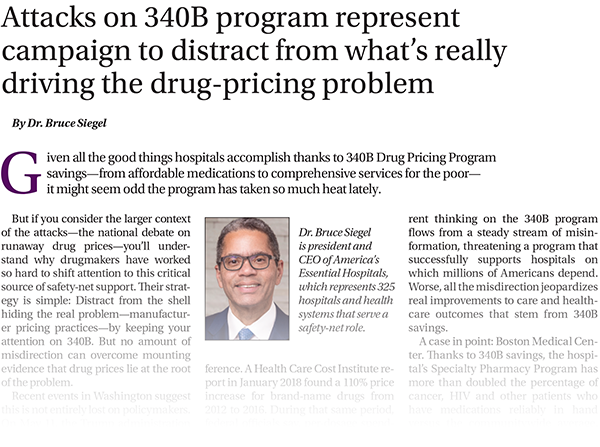 340B Commentaries by Essential Hospital Leaders

340B: A Lifeline to Life (from Harris Health System, Houston)

Congress should save this program that helps provide medicine to low-income Texans
Restricting access to 340B would fray the safety net and have serious consequences for people living on the edge of poverty who struggle to pay for their care, says R. William Whitman, senior executive vice president and chief operating officer of JPS Health Network, says in this Fort Worth Star-Telegram opinion piece. (July 23, 2018)

In a time of rising drug prices, preserve the 340B program
UAB Health System President and CEO Will Ferniany, PhD, and Ascension Healthcare executive Jason Alexander call on Congress to preserve the integrity of the 340B program in this Birmingham News commentary. (May 29, 2018)

A lifeline for Alabama patients
Writing in the Opelika-Auburn News, East Alabama Medical Center’s director of pharmacy services, Chuck Beams, says the 340B program is the difference between life and death for the most vulnerable patients in the community. (April 30, 2018)

Direct media inquiries about this site to Carl Graziano, senior communications director, at cgraziano@essentialhospitals.org or 202.585.0102.